Rising up from the landscape, yet seeming entirely part of it, Woodlands Park Hotel is a Surrey venue whose grounds, landscaping, and exterior let you know that you're entering a venue renowned for contemporary elegance, the home of formal entertainment with a fashionable edge.

As Fiona and Finlay tied the knot, on a bright August Saturday, formal entertainment with a fashionable edge was exactly what they wanted. Both working in financial services PR, Fiona and her groom had chosen to use their special day to launch the agency they'd decided to set up together, with the reception being a showcase not just for them as a couple, but for Layfion Financial as a brand.

That meant everything had to be spot on, and those guests who might go on to become clients had to be left in no doubt that these two individuals were creating a partnership they wanted to do business with.

Fiona, who was responsible for most of the organisation of the big day, knew as soon as she came across Adam's Modern Swing Band that this would prove to be the perfect soundtrack to her big day.

We were proud to be asked to launch both personal and professional lifestyles, and worked with Fiona to choose music that reflected every aspect. On the day, we kept things quietly lively, conveying the sense of a modern outlook, with a concern for traditional values, a sound which worked really well in the setting of Woodlands Park.

Fiona: "It was a big ask, looking for a wedding band that could appropriately launch as business as well, but Adam Chandler's guys more than pulled it off, and made me one very happy new bride, and new business owner!"

Finlay: "I'll be honest – I hadn't even heard of modern swing before I met Adam and his band for the first time, but it worked perfectly; I'm glad I left the planning to Fi, as she seemed to instinctively know what would work. It really was the perfect day, and I'd like to thank Adam and his Modern Swing Band for making a great day truly spectacular." 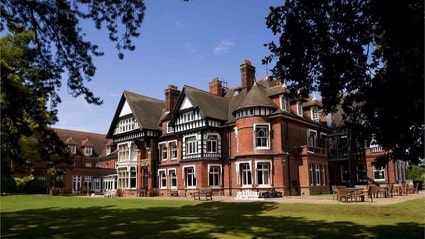